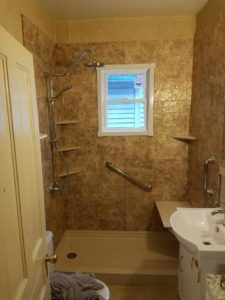 For Frank Mumford, owner and founder of SIR Home Improvements, caring for those who served in the nation’s military is both a personal and community responsibility.

“My father was a veteran of World War II and Korea,” Mumford says. “He was a Marine and saw heavy frontline action. He was shot in the head and leg. He received two Purple Hearts and is interred along with my mother at Arlington National Cemetery in Washington, D.C. His courage and commitment to the American way of life are why I am able to live the life I live today.”

That’s one reason why Baths for the Brave, one of the community service programs supported by SIR Home Improvements through its SIR Home Cares initiative, is so important to Mumford. With the help of the National Alliance on Mental Illness (NAMI) veterans division and the Veterans Administration of Battle Creek, SIR Home Improvements selects specific veterans in need to benefit from the company’s remodeling expertise by receiving a free bathroom makeover.

Giving Back to the Nation’s Unsung Heroes

“Unfortunately, many of the veterans who have given so unselfishly have been left behind,” Mumford says. “We should not allow individuals to slip through the cracks. It is well understood that veterans of wars are highly vulnerable to a number of social and mental ills that affect them at higher rates than average Americans. It is also well known that veterans make up a disproportionate amount of our homeless population and many times end up not being able to afford the life they deserve. ‘Baths for the Brave’ is a way to give back to these unsung heroes.”

50% Off Labor
See how we can save you money
Choose SIR Home Improvements for your remodeling project and you’ll receive a free home energy audit, plus we’ll seal any air leaks we find. Learn more about this valuable service!
Learn More
Cares
Veterans
NAMI
Energy
We’re proud of our many years of providing top-notch residential upgrades that add value to our customers’ homes. However, through SIR Home Cares, we make additional contributions that help homeowners and the world by offering complimentary energy-saving programs for homeowners and by supporting programs for people in need.
Read More
SIR Home Improvements is a proud participant in Baths for the Brave, a program that provides top-quality walk-in tubs and showers to veterans with disabilities free of charge. This program allows our cherished veterans to enjoy a safer home environment while maintaining their dignity and independence.
Read More

SIR Home Improvements is an active supporter of the National Alliance on Mental Illness (NAMI), a national nonprofit program based in Kalamazoo, MI. NAMI provides support for individuals and families dealing with mental illness and conducts education and advocacy programs to raise awareness of the need for mental health services.
Read More

Every customer who purchases a home upgrade from SIR Home Improvements is eligible for our complimentary Energy Solution System, a program that has generated enormous energy savings since we began offering it in 2011. This program comprises an energy audit of your home, identification of the sources of air leaks, and sealing services as needed.
Read More

Provided with Every Purchase
Every customer who purchases a home upgrade from SIR Home Improvements is eligible for our complimentary Energy Solution System, a program that has generated enormous energy savings since we began offering it in 2011. This program comprises an energy audit of your home, identification of the sources of air leaks, and sealing services as needed.
Get Started
Check Out Some Recent Work
Baths
Windows
Kitchens
Save $500 Now
See how we can save you money
Get Your Quote
Great job!! Zack did a wonderful job on the demolition..not one hair out of place or spec of dust. Matt came up with a way to do what I wanted and created a new use for the acrylic. Very satisfied with my new bathroom!!! Highly recommend!
Kristy K.
They always go the extra mile, make sure you are happy, and they are very good at what they do. One of the best companies around!
Jeff B.
Mike drove down 2 hours from Hastings to measure our windows for the install. He was very knowledgeable and kind and even showed me how to remove my blinds from the windows. He was very thorough in his inspection and even went into my crawl space. I have been extremely happy with the service I’ve received so far with SIR. I’m really looking forward to our new windows as we look to provide extra heat to our baseman as we turn it into a playroom for our daughter.
Steve W.
SIR has given us service beyond our expectations. They have done so with highly qualified workmen who gave us cheerful, skilled, and efficient service. In response to a couple of glitches in scheduling, they made every effort to follow up in a satisfactory way. I recommend them without reservation for their skill, integrity, and good cheer.
Elton H.
Both representatives I met with fortified my confidence in choosing to work with SIR Home Improvements. Thank you both so much, I'm so excited for this process to begin! 10 stars for both if I could!
Alvin P.
I had a broken window repaired this morning by Paul from Sir Home Improvement. He did an Amazing Job! The sun is looking beautiful shining through it this morning now. Thank you Paul for showing me wonderful customer service!
Helen G.
All Reviews